The Last Week has been Very Difficult got me. I recently went through A Heart Break That No One knew about. Plus YouTube IS now Implementing another Change which could Collapse on itselfs.
I did Promise that I would let you know If we moved or changed Anything or if anything was going on with me. Well I finally hit my Breaken Point today. We lost 3 Family members in less then a week.
So now we went from 70 Family Members to 67. Which is a huge drop to me.

Now For some It doesn't Bother them. But to me I tryed my hardest to pretend it didn't bother me and to pretend that it rolled off my back like it was nothing. But thats not who I am. Everything and Everyone Means Alot to me. So It Did bother me alot.

Now I know I mentioned Something About a Heart Break. Well I am gonna release Welcome to the Family 70th Family member so you can see how I was happy then compared to now. The day I recorded that I was suppose to meet up with the person I was getten to know After my meeting with My Colleague.

Well I got a message from that someone who I was getten to known During my meeting.I Ignored it.
At One Point Me Colleague Told me to Answer it because it kept going off . I had it on vibrate but that didn't do no good. So I texted them back and told them I would talk to them Later.

My meeting went well (I am glad it did after my stupid phone kept going off. I Am glad it didn't ruin my chances) but the message I got wasn't something I wanted to deal with.So After the Meeting I texted them back to see what is really going on.

Apparently They were only using me the whole time and boy did that Hurt ever. Since I had actually Grew Feelings for them. Well I was upset and was in shock for That whole Entire day (Sept 20th,2016). OfCourse On Social Media I played it off like I was Alright When indeed I was ignoring what Just had Happend. I Continued to work hard and only pay attention to everyone on my social media platforms.

The day after I tryed working harder then hell to forget everything that Just had happen.
One thing I noticed now on how I deal with my hurt feelings is I work myself harder and longer So i can't think about the issue. Which does work. Then Youtube had a hissy fit I didn't see comming. Now there adding Youtube Heros which could put Our channel and others under Greater Risk for being taken down .

That right there put me in a even more bad mood . Then If you thought that was it Later on this week my Other colleague got in a car accident just on Sept22nd of this month. Which made me worry about them and of course still am. So now we got me  upset, worried ,Working until I fall sleep at my desk for the last 6 days in the row to forget all the hurt and pain I went through on Sept 20th,Sept 21st,Sept 22nd, Sept 23rd , and more. Each day something happend beyond my control .

Which if we all know we dont have control over certains things in life. Well anyways so with all those event plus on Sept 23rd haven it confirmed that Twitter maybe the next victim to Google. This made me cringe . So on Sept 24th I made a video About it -->

Doe this Have me Worried? Yes it does. you already Seen what google is Doing to YouTube. Can you Image what will happen if they get there hands on Twitter? So Far Twitter has been given us our freedom of speech ,no hassles or anything. Which makes me happy. I feel like I am at home when i am with Twitter. It scares me to know that now Google could possible change that as well.

So I am concerned about all this. I have lost Momentum to work on videos now for Youtube. Because one they already hurt me Financially. Every Since the New censorship My Views have dropped from over 1000 a day to now maybe if i am lucky 80 if not lower. Does that bother me? Yes. 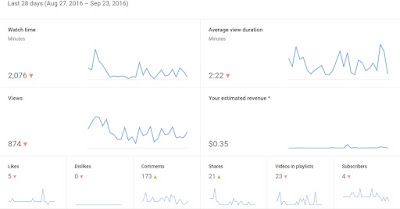 Wow Look How Much money I make ? Ya for the work I do I am way Under paid here. It is time for a change of Venue. $0.35 I AINT NO FUCKEN SLAVE YOUTUBE.YOU DONT PAY ME WHAT I AM WORTH!And believe me I dont get to keep that.I Haven't even gotten to the part where I got my adsense Verified. you need $ 10.00 To have it verified so for the last 1 year I have been a partner I have been slaving for a company who pays me under wage and also hasn't paid me a dime yet.

I will Admit Most of YouTubers have to be a jackass to think we are gonna make something from them.Thats my opinion.So if you think Being A Youtuber Partner is worth it  look above at that picture and ask yourself this Question IS IT WORTH IT ?

My Answer Would be No. So To Fix This Issue Once and for all I am gonna. try to figure out How to strengthen My Vimeo and Vidme. Mostly Vimeo I AM gonna try to Focus ON. But I Will Still be maken Videos For Youtube. It Just won't be so consistant. I know I have talked alot about it here and there. But I need to make money to support myself and our content. It is not cheap at all. I recently was told my audio isn't great which raises more concerns on what else I need to make our channel better.

At the Sametime My Family ( my actually parents and so on) Who support me are actually worken there ass's off to support me. I would Really like to be able to support myself. But another Issues I have on my Plate is I still need my car Fixed. it has a blown head gasket and it is gonna cost anywhere from $1,800 to $2,200 TO start to fix it with a mechanic .  I wanna get it fixed at this chevy place . But ofcourse they also told me I could need an engine if it gets worse.

An Engine for a 2003 Chevy Venture FWD cost $3,500 Dollars and that is without Labor. Now you can see the mess I am in. Also that Acquaintance I told you about awhile ago he is gone . He argued so much with his Girlfriend that they broke up ( not to mention he was in a abusive relationship) I kept trying to be there for him by talken to him because I know how it is to be in A Domestic Violence Relationship.

I have been in plenty of them. Not proud of it eaither. Wished I met better people but I keep meeting the Physcos ,or the ones who have a hardcore Criminal backround and i dont know it until I by Accidentally Stumble upon it in a suitcase where they keep there paperwork.

I told you guys I was ditzy. I meant it . I always give people a chance until they prove me wrong. Well there ya go. I am smart but can be very Ditzy As well. I am not as dumb as you might think but I am not Ernestine Eaither.

Anyways Besides All that Crap I was sick for a few days as well. I just recently Started to get better But Still is like Half/Half Better. So I Am Trying My Best to work and get better. So far it seems like it is at bay. So Thats good :D .

Anyways I will Be Working on InBetween Storys Part3: Tommy First Love  And Alexia's First Encounter  Video still.Also I will be Working on Part 4 InBetween Storys Blogg soon. :D I also will be working on A special Blogg Letter to 70 family Member anyways . I need a Special blogg letter to be with its video or it wont be Complete.The video is already done of the 70th family member video . now I just gotta make the Special Blogg Letter to it.

On top of those 2 videos and Special blogg letter.I gotta Edit 3 videos that I haven't edited yet. Which is True Love  , #YouTubeOverParty  and Stormy Night.  Remember some of these titles can be change since they havent been edited. But most likely True Love will be one of them that won't change. the other 2 however Might.

Also If you watch My Twitter And you saw me vent today . Just to let you know It was me venting. When I vent it is just to vent my Frustrations. I Wouldn't ever Quit Youtube Although I sometimes Really want to because it is getten so fucked up on there.  <----- See that is venting.

I am really upset about Youtube . I just hope they Fix it before it gets out of hand. But Anyways Rest ASSURE WE AINT GOING ANYWHERE! Just You sweetys need to follow me on twitter and all as well Just Incase Youtube Decides to flop.TO Be Quite Honest I am losing faith in that company.

But ALL and ALLL thats just me venting my frustrations about it all. I will keep you posted on Everything. I do have more Back logged gaming videos still for you guys. So ... Oh and one Other thing I haven't given up on playen games. Just right now I gotta focus on all this stuff I mentioned.

We Will Get back to playen some more games and so on. :D

Anyways I Really Wanted you to know that. I love you Sweethearts. I miss you and I love you with all my heart.

♥♥♥I love you Sweetheart xoxoxoxoxoxo ♥♥♥ 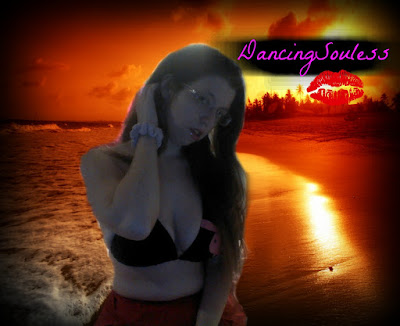 Posted by DancingSouless at Sunday, September 25, 2016 No comments: